We Are Making Progress 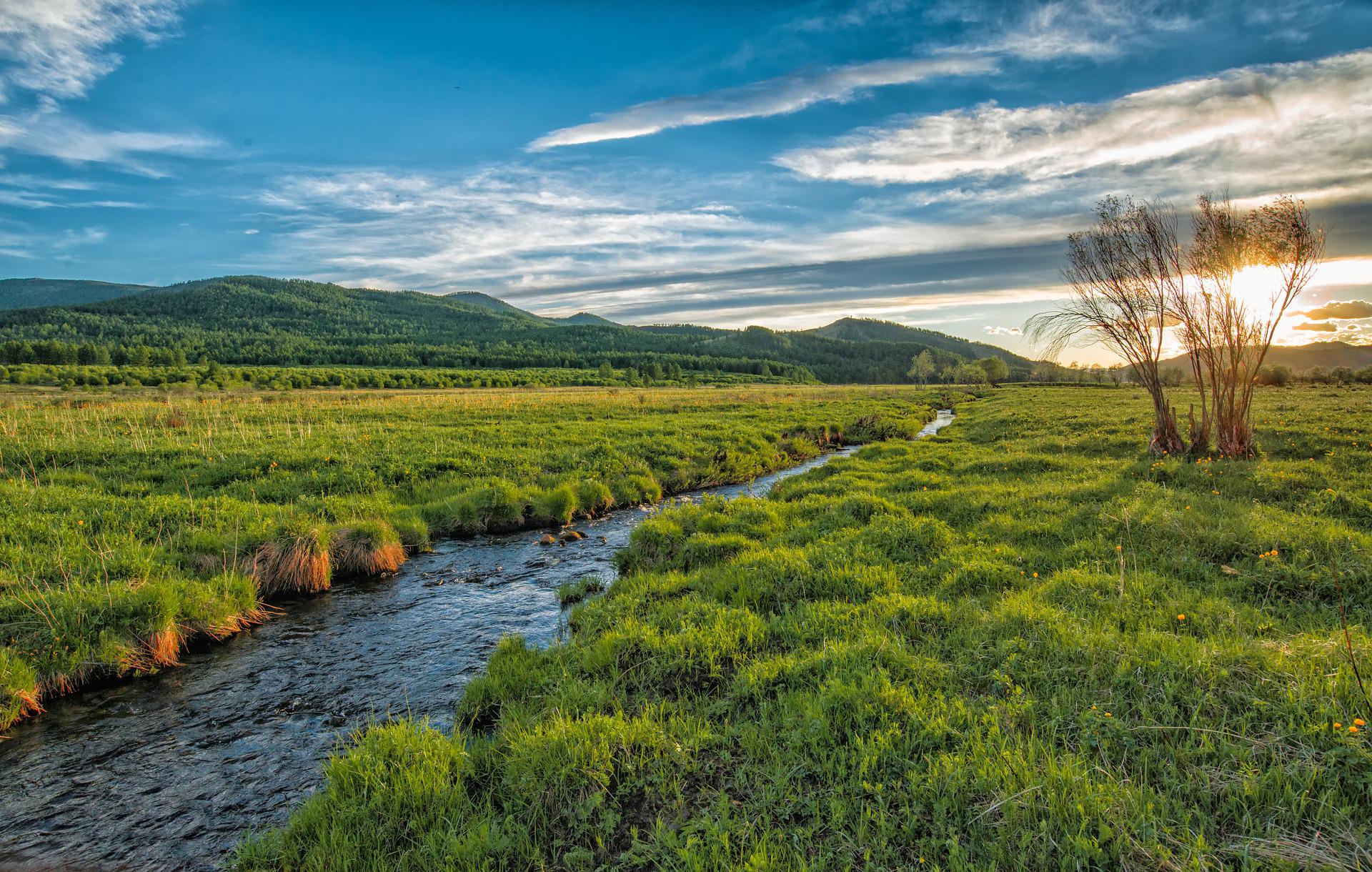 I mentioned in my last post of my objective to focus more on the good news as opposed to the gloom and doom of the headlines. In that spirit, I picked up Steven Pinker’s Enlightenment Now. Pinker wrote this book with the intent to show that overall as a society we are making progress, and that contrary to popular opinion things are actually getting better and not worse. He asserts that further progress will materialize so long as we continue to embrace the ideals–reason, science, humanism, and progress–of the Enlightenment. These ideals, he believes, are the impetus for the social betterment we currently enjoy. And he fears we are in danger of forgetting them, which would be detrimental. Thus, he took it upon himself to revisit these ideals to showcase their value and to preserve them.  Hence the book’s subtitle The Case for Reason, Science, Humanism, and Progress. I vaguely recall the works of eminent Enlightenment thinkers like Jean-Jacques Rousseau, John Locke, Thomas Paine and Immanuel Kant from my university days. I was intrigued to revisit them.

The Enlightenment is a movement that started in the 17th century and was at its height in the late 18th century. Enlightenment is, simply put using Kant’s words, “dare to understand.” It is about us striving to understand the human condition and our world and “not fall back on generators of delusion like faith, dogma, revelation, authority, charisma, mysticism, divination, visions, gut feelings, or the hermeneutic parsing of sacred texts”. (Pinker, Steven. Enlightenment Now (p. 8)). This can only be achieved with reason. And reason, is the foremost requisite for the Enlightenment thinkers. Since they were aware of how unreasonable human beings can be, they proposed using the methods of science—skepticism, fallibilism, open debate, and empirical testing— to define and refine our reasoning. It is through science, they believed we would achieve reliable knowledge. They also believed in universal human nature, the capacity to suffer and flourish. Hence the promotion of humanism, “which privileges the well-being of individual men, women, and children over the glory of the tribe, race, nation, or religion.” Pinker argues it is ideal of humanism that led to the abolition of barbaric practices such as slavery that had been commonplace across civilizations for millennia. All these three ideals when applied make possible the fourth ideal of the Enlightenment, progress. The progress they envisaged would come from the creation of human-made systems like governments, schools, markets and international institutions through which humans can collaborate for their betterment. It was envisaged that these systems would result in another Enlightenment ideal, peace.

We are more peaceful than ever!

For someone like me who is both sad and disappointed by the fact that we are still starting new wars in 2022, Pinker says I should take solace that we are actually starting fewer wars overall. For a start, there have been no wars between any great powers since WWII.

Next, “war in the classic sense of an armed conflict between the uniformed armies of two nation-states appears to be obsolescent. There have been no more than three in any year since 1945, none in most years since 1989, and none since the American-led invasion of Iraq in 2003, the longest stretch without an interstate war since the end of World War II (Pinker, Steven. Enlightenment Now (p. 158))”.  I felt a little less disheartened until I read a couple of pages later that the number of civil wars declined after the end of the Cold War—from fourteen in 1990 to four in 2007—went back up to eleven in 2014 and 2015 and to twelve in 2016. Pinker goes on to add  that  this isn’t as discouraging if you look at the number of casualties, which is less than from previous civil wars. Then I had the bad idea to check how many have died in the Syria and Yemen civil wars. According to the United Nations (the UN), in 2021 the number of deaths was over 350,000 in Syria in 10 years of fighting, and in Yemen 377,000 in 7 years. The UN stressed that these figures are an underestimation. When I compare these to some of the examples that Pinker quoted in his book, I don’t see an improvement. For example, the civil war in Mozambique that lasted 10 years saw 500,000 dead, and Sudan’s war from 1983-2002 created a million deaths (Pinker, Steven. Enlightenment Now (pp. 158-159)). Again he stresses not to be discouraged because wars are taking place in countries where the ideals of the Enlightenment haven’t taken hold. It is probable these nations will get there because the vast majority of countries, 193 out of 195, believe in the ideal of permanent peace, hence why they signed an agreement to make war illegal under the patronage of the UN. Yes, members of the UN Security Council that are supposed to help keep peace will occasionally break their own rules but the antidote to this is a healthy democracy.

Further encouraging news is that democracy is more popular than ever! As of 2015, 103 nations are democracies, at 56 percent of the world’s population. “And if we add the 17 countries that were more democratic than autocratic, we get a total of two-thirds of the world’s population living in free or relatively free societies, compared with less than two-fifths in 1950, a fifth in 1900, seven percent in 1850, and one percent in 1816.” (Pinker, Steven. Enlightenment Now (p. 203)). Looking at progress since 2015, the figure is up to 61% of the world population in 2020. 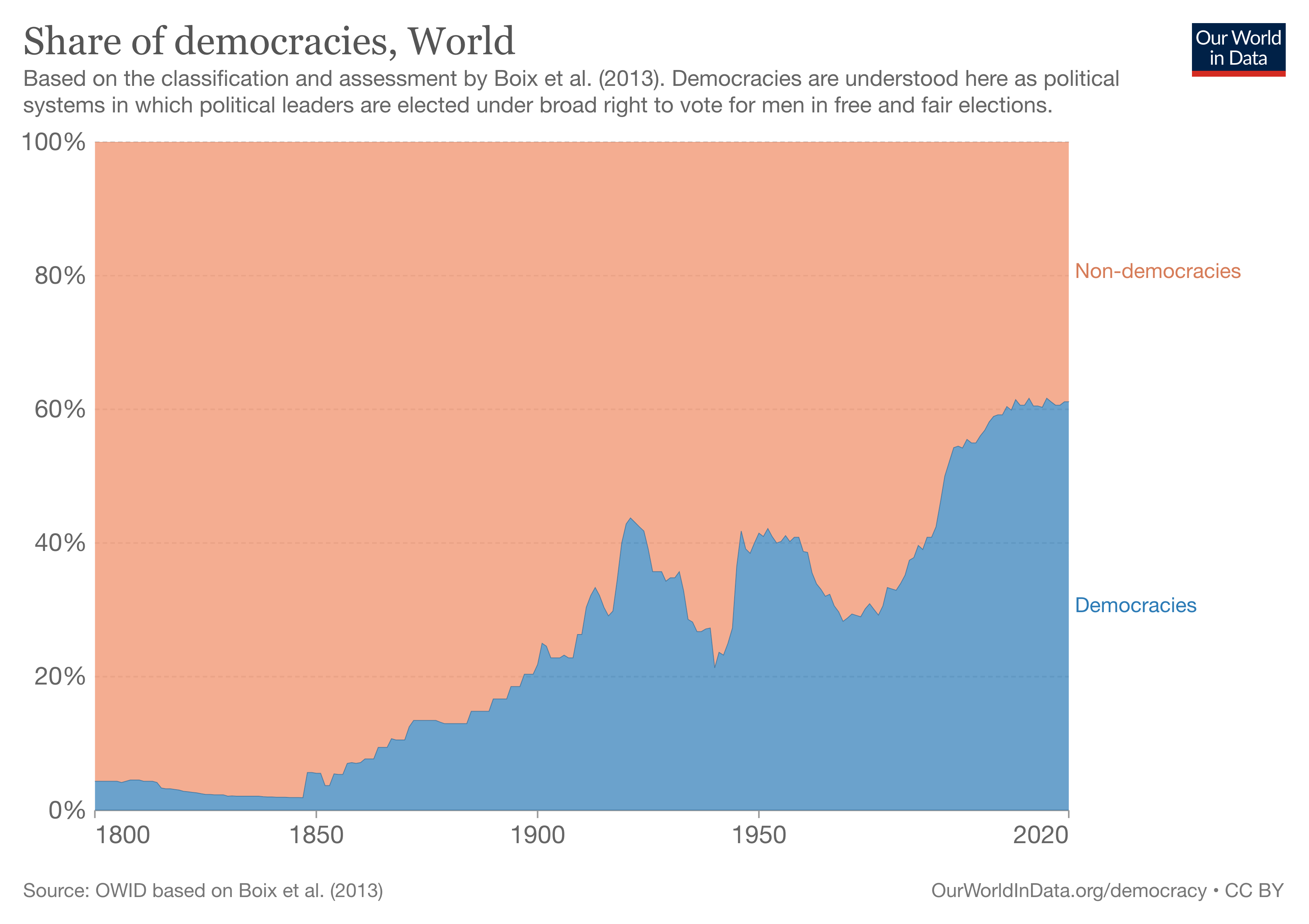 I had the question just how healthy are these democracies? When I look at the democracies I live in and/or others, they don’t look so healthy to me. What kind of democracy can you have when millions, even billions of campaign dollars are required to become a senator/governor/president as you do in the US? And democracy gave us Brexit and Boris Johnson! When I dove further into what makes up the 61% of world democratic nations, it turns out that the biggest portion 36% are electoral autocracies versus 31% of electoral democracies and 19% of liberal democracies.  Pinker argues that democracy is not perfect and it is certainly not where an informed populace deliberates about the common good and carefully selects leaders who carry out their preference. Moreover, elections aren’t the essence of democracy, they are only one of the measures. Most people know that their votes are unlikely to affect the outcome of elections, instead “they use the franchise as a form of self-expression: they vote for candidates who they think are like them and stand for their kind of people.” (Pinker, Steven. Enlightenment Now (p. 205)). This explains why I no longer vote, I don’t like or see myself in any of the candidates. Pinker asserts that democracy is better understood as people having the freedom to complain and replace government without violence, and leadership leaves them free to dislodge it. For example, even though campaigners for women’s suffrage couldn’t vote to grant themselves the vote, they won it by protesting. He gives other measures of democracy such as human rights and practice of capital punishment. Human rights (protection from torture, extrajudicial killing, political imprisonment, and disappearances) is generally on the up globally (See chart below. You can also search by country here). Capital punishment has also fallen out of practice in most countries in the world. 109 countries have abolished it, 7 have abolished it for ordinary crimes (while maintaining it for special circumstances such as war crimes) and 24 are abolitionist in practice (no execution during the last 10 years). 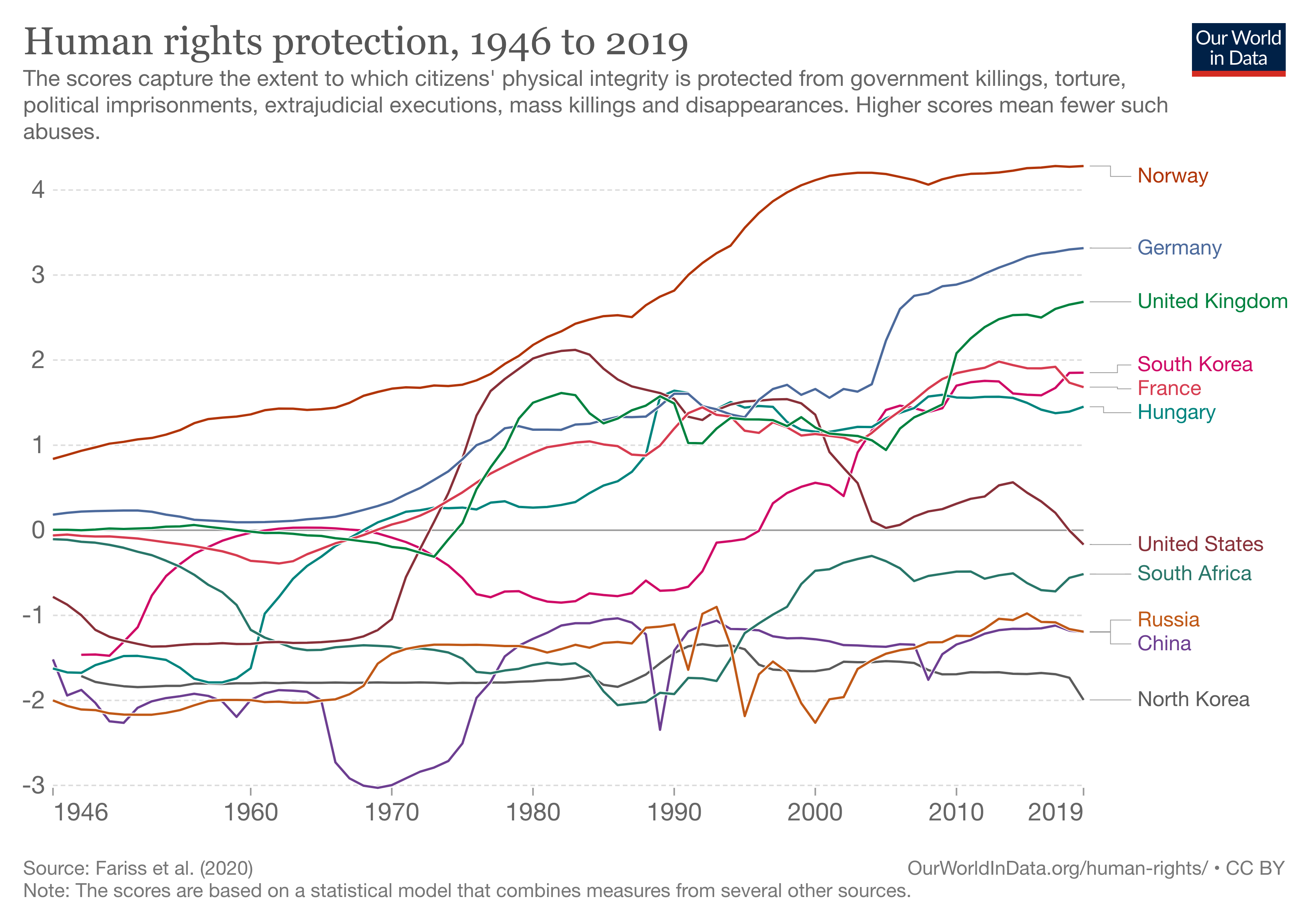 Overall, Pinker presents powerful arguments and data to illustrate that in the key aspects of life–from wealth to health to the environment– we are better off than ever before. I found his explanations convincing enough to reinforce the belief that the big problems we face are solvable if we apply reason, science, and humanism. But I do question Pinker’s assertion that the merits of these ideals can be demonstrated and defended in a distinctively 21st-century way: with data.  As the cognitive neuroscientist Sharon Tali wrote in her book The Influential Mind “numerous experiments and observations, pointed to the fact that people are not in fact driven by facts, or figures, or data…The accessibility to lots of data, analytic tools, and powerful computers is the product of the last few decades, while the brains we are attempting to influence are the product of millions of decades… The problem with an approach that prioritizes information and logic is that it ignores the core of what makes you and me human: our motives, our fears, our hopes and desires. As we will see, this presents a serious problem; it means that data has only a limited capacity to alter the strong opinions of others. (Sharot, Tali. The Influential Mind (pp. 14-15)).” I’m convinced by Pinker’s arguments because of how I feel about progress–I love having electricity, traveling the world in planes, and being able to buy whatever food I want from the supermarket–and by my fears–I don’t want to live without these modern comforts–and my desire to have more. Thus, I’m hopeful that the ideals and the impact of the Enlightenment have been around long enough to have made a lasting imprint on our consciousness and that we shall continue to strive for more progress.