Growing up in Britain in the 1980s and 1990s I heard a lot about the power and prestige of the City, as the financial center of London is known. Curious to see what all the fuss was about, I began working as a technologist in investment banking and found myself predominantly surrounded by colleagues whose main motivation in life was to make as much money as possible. Their focus was all on the year-end bonus. Contrast this with my current role as an innovators’ nurturer, where I work with scientists, engineers, and managers whose primary motivation is to improve lives and make the world better.

It has always struck me as odd how financiers are lauded (even with some level of envy and contempt) for being able to enrich themselves exorbitantly, while scientists and engineers are dismissed as nerds who live in a parallel universe of abstract concepts and gadgetry. Since they make things we need in society they are tolerated but, with a few exceptions like billionaire Bill Gates, only rewarded enough financially to live a comfortable life. I often wondered how the market determines the value of people’s contribution to society. How can bankers, who simply move money around, be worth more than those who treat cancer patients, build bridges, develop vaccines for malaria, and educate kids? Why does a CEO of a company make 30 times more than its average worker?

I use the word value a lot when it comes to my work, as it is what motivates me to do my job.  By value I mean that my work has a positive impact on my clients and consequently the world. It is clear that my personal interpretation isn’t always aligned with how the market and wider society define value. I really wanted to understand what it means from society’s perspective, so when I came across the economist Mariana Mazzucato’s book The Value of Everything: Making and Taking in the Global Economy, I was hopeful that I would find some answers in it. I was also skeptical because the author is an economist, and I believe that a large reason why the concept of value at the societal level has become distorted is because of economists. I feel economists have become PR agents for financial institutions, promoting only their view of the economy. Mazzucato herself acknowledges in her book that the absence of debate by economists on the concept of value has made it much easier “to be used and abused in whatever way one might find useful”.

So what is value from a market’s point of view? Value is based on the production of goods and services. The accumulation of value is what creates wealth. How is it determined which services and goods are more valuable than others? Mazzacuto gives an historical explanation. For classical economists like Adam Smith, David Ricardo and Karl Marx, whose views were prevalent in the 18th and 19th centuries, the value of a product is based on the amount of resources and labour that went into its production. The 20th century gave way to the marginalist theory. Marginalists see value as lying in the prices goods and services receive based on their usefulness to consumers. The scarcer the goods are, the more consumers are willing to pay.

The marginalist view of value is still prevalent today. A good example is pharmaceutical companies setting high drugs prices based not on the cost of R&D but on what they refer to as the intrinsic value (saving lives and reducing pain) to society.  Governments (who often fund a big chunk of R&D costs for drugs through grants), insurers and consumers disagree. There is increasingly acrimonious debate about the cost of drugs, especially for chronic conditions such as hepatitis C and cancer, that can run hundreds of thousands of dollars per patient per year. The dominance of this subjective standard for value has led to the confusion of value extraction for value creation. This for me is the key take away from the book. What is value extraction? It is “activities focused on moving around existing resources and outputs, and gaining disproportionately from the ensuing trade,” while value creation is “the ways in which different types of resources (human, physical and intangible) are established and interact to produce new goods and services.”

Why does how we define value matter?  As Bill Gates put it in his 2009 TED talk titled Mosquitos, Malaria and Education, “I think there are some very important problems that don’t get worked on naturally. That is, the market does not drive the scientists, the communicators, the thinkers, the governments to do the right things”. Yep the market does not drive innovators to work on major problems such as diarrhoea and malaria, which are some of the world’s top killer diseases!  But these diseases mostly affect people in the poorer parts of the world, thus the potential financial rewards in treating them is deemed low. Pharmaceutical companies had largely neglected malaria R&D until the Gates foundation started investing millions of dollars into it.

Many would have us believe that the market is the way it is due to the ‘invisible hand’, which automatically generates socially optimal outcomes without the intervention of the state. The reality is that there is no such thing as the invisible hand. The market is designed and run based on deliberate policies, for instance, how GDP (gross domestic product) is counted. GDP is compiled by government officials according to the international standard know as SNA (System of National Accounts) devised by the United Nations and other international government agencies. As the compilation of national accounts is influenced by marginal theory, it sums up the price of all production and/or income and/or expenditure of all economic actors. The perceived value of a company, organization and profession is determined by their contribution (value-added) to the GDP.  For example, the fact that the government is recorded as a spender and not as a producer reduces its value-added. Consequently, has helped promote the narrative that the government isn’t productive even though it spends money on building roads, education and funding R&D for technology and drugs that many companies make money from. The banking industry, on the other hand due to the high income contribution (from high wages) to the GDP is perceived as high value adding, hence the declaration by the then CEO of Goldman Sachs Lloyd Blankfein in 2009 that Goldman’s employees are some of the most productive in the world. This was a year after Goldman and its competitors had received billions from the government to rescue them from collapse from the financial crisis they caused. In spite of its considerable size of the economy and profits, only 15% of the funds the financial industry generates go to non-financial industries. Instead the banks prefer to trade shares with each other, a faster way to make money. Again, this is possible because of government policies, and/or lack of them.  Starting with the deregulation of the financial markets in the 1970s culminating in the repeal of the Glass-Steagall Act in the late 1990s. The act was highly unpopular in the banking industry because it prevented commercial banks from participating in high risk investments (e.g. trading securities) and investment banks were not permitted to take deposits. In 1999 a new act, the Gramm-Leach-Bliley (GLBA) was passed which enabled commercial banks to become investment banks and vice versa, and even merge with insurance providers as Citicorp did with Travelers Group to form Citigroup. Some such as the Nobel Prize-winning economist Joseph Stiglitz have argued that the GLBA helped to create the 2008 global financial crisis.

This has broader implications beyond the finance industry, for example, on how companies are valued and on talent acquisition. Publicly traded companies are subjected to the constant whims of share trading and quarterly financial results. To prop up their value (share price) it has become common practice for companies to buy back their shares. The more shares they buy the less there are, pushing up earnings per share (EPS), one of the key measurements of a company’s success. It is also a measure of senior executive performance and used to determine their compensation. Between 2003 and 2012, 449 companies listed in the S&P 500 index deployed $2.4 trillion in buying back their own shares, a sum that constituted 54 per cent of their collective earnings. Add in dividends, which took out a further 37 per cent, and only 9 percent of profits were available for capital investment. Mazzucato also shows using data from the US Bureau of Economic Analysis that “business investment in the US is now around its lowest level for more than sixty years” .

How does it affect talent? I have never forgotten a scene from the movie Margin Call about the actions taken by a group of employees working at an investment bank during the subsequent financial collapse of 2008. In the scene, a character called Eric, head of risk management at the bank,  is conversing with a colleague Will Emerson, head of trading desk, who is trying to convince him to go back to the bank he has just been fired from to help them out of the crisis:

I’ve already been paid enough by them. Did you know I built a bridge once?

I was an engineer by trade.

When I worked at an investment bank I met many Erics who had been swayed by the high wages of the sector, lured away from using their skills to build bridges and cure cancer.

As I mentioned my interest in the concept of value stems largely from working with those who create innovation that benefits their companies and wider society. I see how challenging it is to make scientific and technological discoveries in a world that is focused on and celebrates value extraction. It is no secret that breakthrough discoveries in science and technology take a long time and plenty of resources. The question is what can innovators do to survive and thrive in the current market environment and even the future? In recent years we have seen increasing awareness and debate about current market failures. Perhaps influenced by the concept of “shared value” capitalism (that you can maximize profit by addressing societal issues, doing “good”)  put forward by Michael E. Porter and Mark R. Kramer of Harvard Business School, CEOs have been touting “conscious capitalism”, “inclusive capitalism” and “compassionate capitalism’. In August of 2019 Business Roundtable (BRT), an association of the chief executive officers of nearly 200 of America’s most prominent companies, released a formal statement of corporate purpose pledging to focus more on stakeholder interests and less on shareholders’.

The reality is that it will take a long time for any concrete changes to be seen in the market. In the meantime, they are things that innovators can do to be more effective. First, they must develop a mechanistic understanding of the market. I’m often surprised by how oblivious they are to how business decisions are made. How can you influence something you don’t understand or see? Secondly,  innovators must learn to tell better stories so they can engage and influence key stakeholders. For example, they have to be able to explain the business benefits of spending a million dollars on an equipment to conduct a test. And be able to paint a clear picture of what the future would look like with their innovation and its impact on their company’s bottom line. I see the value of my work in helping innovators be able to do the above. 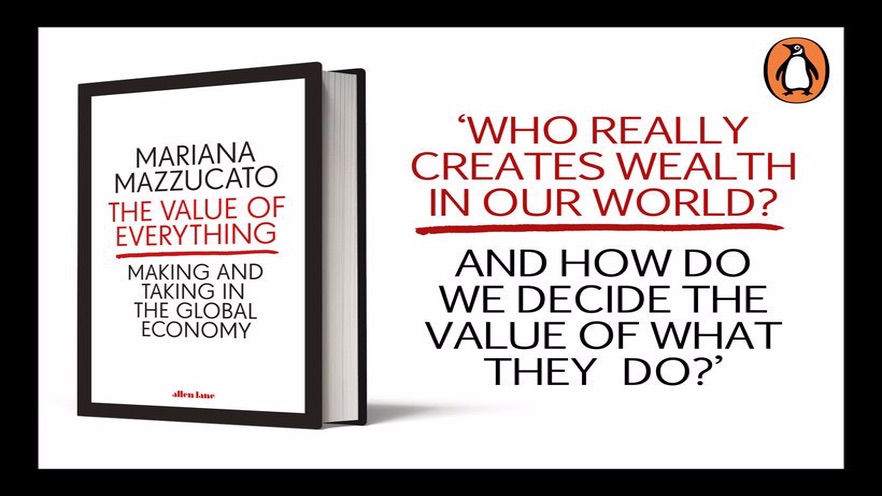