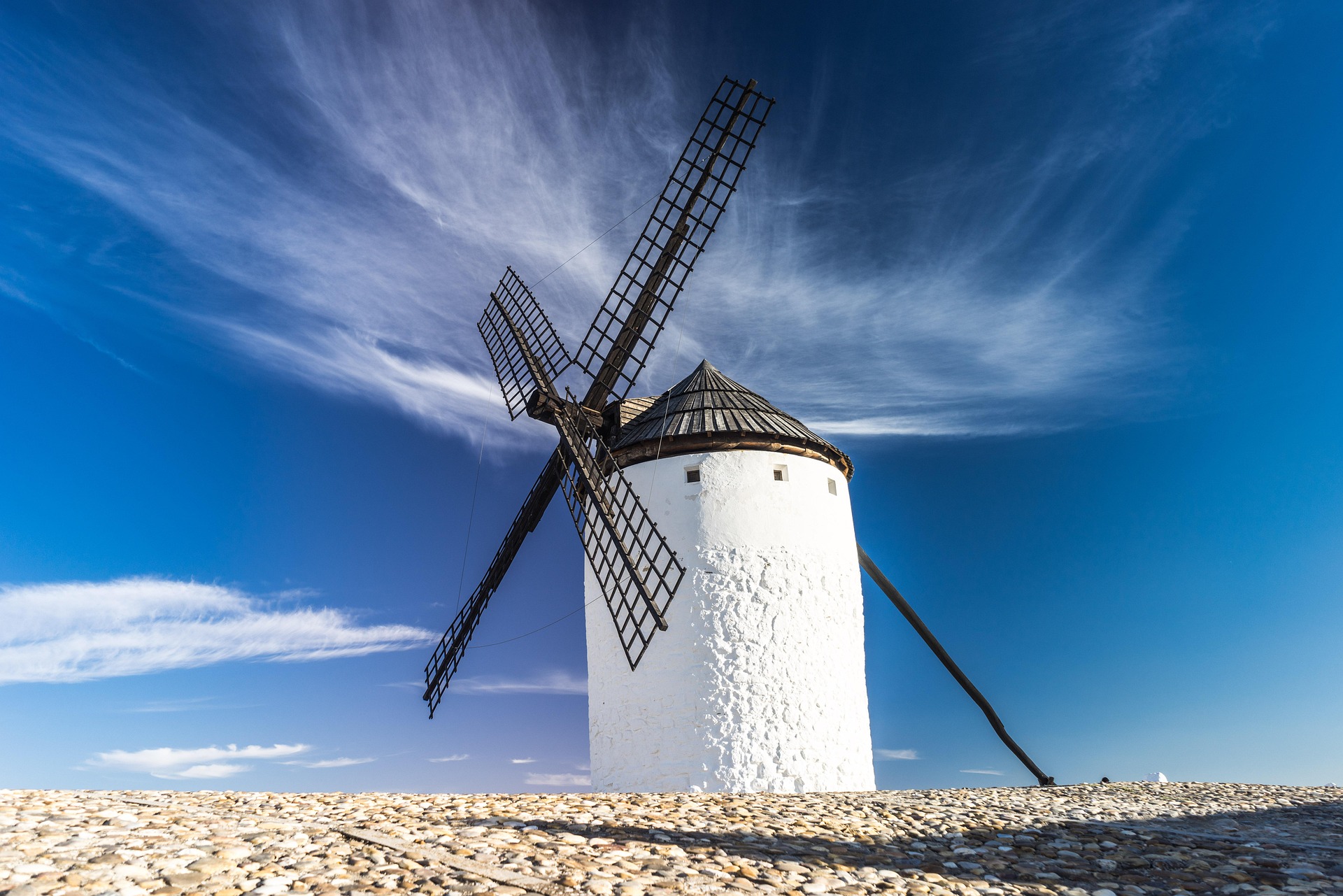 I’ve been thinking a lot about energy, and not just because of the current energy crisis Europe is experiencing. In fact, I started mulling over it back at the end of January of this year when I read an article in the New Yorker titled: Can Germany Show Us How to Leave Coal Behind? I was drawn to the title because I imagined that the answer would be yes, that there would be much to learn from Germany, a paragon of innovation and industrialisation, and I remembered its highly publicized Energiewende policy of transitioning to renewable energy.  I was wrong! Germany’s main home-grown (it mostly imports its energy sources) type of fossil fuel is still coal, and the most polluting kind–lignite. As of 2021 lignite contributed to 19% of Germany’s gross electricity production. I was shocked. I wondered if this is the norm, and how much coal is still used to generate energy globally.

Coal is still a main protagonist in the world of primary energy, in second position after oil. It has stayed around the 30% share of global primary energy source for the past 5 years, and for some individual countries such as China it is as high as 61% of their energy source. Overall the world’s primary energy consumption is still mostly from fossil fuels (oil, coal and gas), and as of 2021 it was 82%. This share has changed little in a decade,  in 2011 the share of fossil fuels was 85%. You can further drill down  on the data by country and fuel type at the informative Our World In Data’s website. Seeing these figures was worrying, even more so as the ramifications of the economic sanctions on Russia became apparent. I had many questions. Why are we still so dependent on fossil fuels even though we know they are the biggest source of CO2 emissions? We have known about the actual degree of warming associated with the doubling of atmospheric CO2 for more than a century, and uninterrupted, accurate measurements of CO2 began in 1958. Why do countries like Germany have an energy strategy with such high geopolitical risks? For example, in 2021 Germany imported 63.7% of its energy sources, in the EU it was 62%, in both cases Russia was their main supplier. The other puzzling thing for me is that renewable energy sources like solar and wind have been touted for decades as the great solution to getting us to net zero emissions, yet as of 2021 contributed only 10% of electricity generated. Ironically the use of coal for electricity generation also increased by 9%. I imagine it is because the intermittency problems that plague solar and wind power generation haven’t been solved. And at their most efficient, wind generates power at 45% of the time, while it is 25%  for solar. What I’m more baffled about is why such reluctance to adopt nuclear energy as an alternative replacement to fossil fuels? Nuclear reactors generate power 90-95% of the time and produce zero carbon emissions which would get us faster to decarbonization and net zero. As of 2021 nuclear reactors are used to generate only 10% of global electricity. 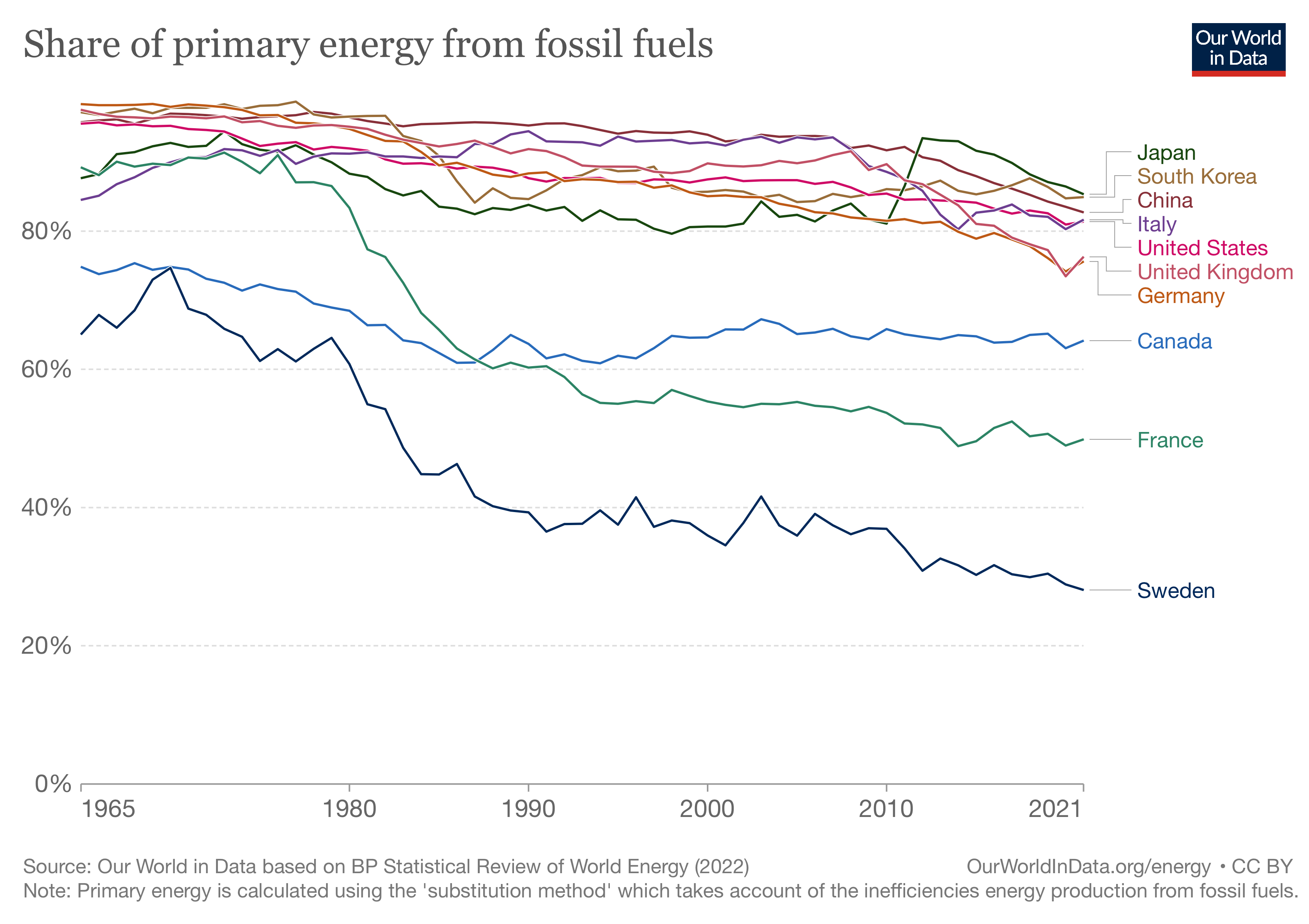 I know that the vast majority of people will find my bewilderment on the reluctance of mass adoption of nuclear reactors unreasonable. They will say that nuclear reactors are very dangerous, and refer to the accidents at Chernobyl nuclear plant in 1986 and Fukushima Daiichi Power Plant  in 2011. I thought the same too until in 2020 when  I saw a TED presentation by Michael Shellenberg on nuclear energy that prompted me to question this belief and inspired further research. I discovered that nuclear reactors are much safer than the coal and oil operated power plants that are accepted and plentiful. Chernobyl and Fukushima were disasters and unusual. Thousands died from Chernobyl because necessary safety precautions weren’t put in place and the government initially kept it a secret, preventing life-saving actions from being implemented. With Fukushima there was no direct death from the incident. To be sure I wasn’t imagining things because it’s been two years since my research, I decided to update my knowledge. I started with data. The ever-thoughtful folks  at ourworldindata.org had worked out how much mortality and carbon emissions can occur per 1 terawatt-hour electricity production using a typical city of 150,000 in the EU. As you can see in the bar chart below, nuclear is the second safest after solar and the cleanest in terms of greenhouse gas emissions.

For a more in-depth analysis of nuclear power generation I picked up the book A Bright Future: How Some Countries Have Solved Climate Change by Joshua S. Goldstein and Staffan A. Qvist.  The book focuses on electricity generation because fossil fuel carbon emissions come primarily from three sectors of the economy—electricity generation, transportation, and heat. And the authors firmly believe that phasing out the use of fossil fuels used for electricity is the quickest and most far-reaching way to reduce greenhouse gas emissions. They use Sweden primarily as a model of a country with a sound sustainable energy strategy and contrasted it with Germany’s approach. The oil crisis of 1973 and 1979 that caused huge price spikes and supply disruptions prompted Sweden to find an alternative to imported fossil fuel sources. To protect some of its last remaining undammed rivers, they opted not to expand hydropower.  Instead they chose to go with nuclear power generation. Between the 1970s and 1980s they built a dozen nuclear power plants, 8 of which are still in operation today. They currently produce 40% of the country’s electricity, with another 40% coming from hydropower and the rest from biofuels and wind. From 1970 to 1990, Sweden cut its total carbon emissions by half and its emission per person by more than 60 percent. At the same time, Sweden’s economy expanded by 50 percent and its electricity generation more than doubled (A Bright Future (p. 20)).

What did Germany do? They opted to invest in wind and solar renewables while phasing out nuclear reactors. Since the start of its Energiewende transition plan in 2010 it has increased the percentage of electricity generated from renewables to around 40%. However, it hasn’t made meaningful reduction in its greenhouse emissions. In 2010 Germany’s CO2 emissions per capita were 9.1 and they were 8.06 in 2021 (in 2020 as a result of Covid-19 lockdowns it was 7.6). At the same time it continues to enjoy the status as the leading producer of lignite coal in the world, a position it has held since industrial lignite mining started in 1962. Coal in the first half of 2021 was the biggest contributor to Germany’s national grid. Sweden’s CO2 per capita was 5.9 in 2010 and by 2021 it is 3.8. One could argue that it is unfair to compare these two countries since Germany’s population is 8 times the size of Sweden. However, if you look at their GDP per capita it is comparable, in 2021 Germany’s was $51,000 and Sweden’s $60,000.

To illustrate the difference in outcome of both countries energy strategy the authors Goldstein and Qvisttook took Sweden’s biggest nuclear reactor site Ringhals and compared its output to that of a similar size power plant operated by coal, oil and renewables. Ringhals sits on 150 acres (1/4 square mile) and can produce up to 4 gigawatts of electricity, 24/7. It averages 24 terawatt-hours of electricity generated in a normal year. To replace the Ringhals plant with one fueled by coal would require almost 11 million tons of coal each year—a train more than 1,300 miles long, producing 2 million tons of toxic solid waste (ash, mercury, and more), including radioactive components—enough to kill about 700 Swedes each year. And contribute a total of 22 million tonnes of C02. (A Bright Future (p. 24)). An equivalent plant operated by oil would require 40 million barrels of oil be pumped and transported every year, the size of twenty supertankers, with risks of massive spills at sea, from pipelines, or from trains. Burning the oil would also release particulates, though less than coal, and pour 17 million tons of CO2 into the atmosphere (A Bright Future (p. 25)).

How about energy generated from wind and solar? To obtain similar capacity from a wind farm would require 2,500 turbines, each 650 feet high, spread over 400 square miles. And output would be variable and there is no reliable and economically viable way to store excess energy from wind. With solar because of its intermittency problem and the fact that the sun only shines a few hours a day about 20 GW of power would be needed to produce the same amount of electricity as Ringhals’s 4 GW. The number of solar panels required would cover 40–100 square miles depending on the location. To visualize what this would look like, “imagine driving down a highway at 65 mph, with solar cells stretched out for a mile to the right of you and a mile to the left. It would take you about half an hour before you got to the end of the solar farm (A Bright Future (p. 26).” Furthermore, after serving their technical life span of about twenty-five years, there is currently no sustainable way of recycling the panels and disposing of some of their toxic materials such as lead.

Of course, nuclear reactors also produce toxic waste that is hard to discard. Sweden has in place a long term disposal plan managed by the Swedish Nuclear Fuel and Waste Management Company (SKB). After spent nuclear fuel has cooled for a year in water pools at the power plants, becoming less radioactive, SKB transports it to an interim storage facility near one of the power stations. The radioactive spent fuel is stored there in pools of water 26 feet deep—the water absorbs the radiation safely—located in bedrock 100 feet below ground level. This facility stores about 7,000 tons of spent fuel, which is the entire high-level waste (uranium fuel that has been used in a nuclear power reactor) from Sweden’s nuclear electricity generation for more than 40 years. After the waste has cooled down and become less radioactive during its stay in the interim-storage pools, it will be inserted into cast iron that will be encapsulated in copper canisters sealed with a specialized welding method. These 25-ton canisters will be transported about 250 miles to the final repository, where they will rest in tunnels in bedrock 1,600 feet underground, packed in clay. The rock has been stable for almost 2 billion years and is expected to hold the spent fuel safely away from groundwater for 100,000 years until the radioactivity has decayed away, even if conditions change such as with sea-level rise or an ice age (A Bright Future (pg. 118-9))

Reflecting on what I read in A Bright Future and elsewhere on nuclear energy I was still racking my brain about why Germany and other industrialized countries such as Japan are shutting down their nuclear reactors when there is plenty of evidence demonstrating that the benefits of nuclear power sources outweigh those of solar and wind. Every news headline about increasing energy costs and shortages of gas had me questioning again and again why not build more nuclear plants and why is it so hard for us to give up fossil fuels. Then last month I came across Vaclav Smil’s book How The World Really Works, the title alone filled me with hope because there is clearly a LOT I don’t know about the world. 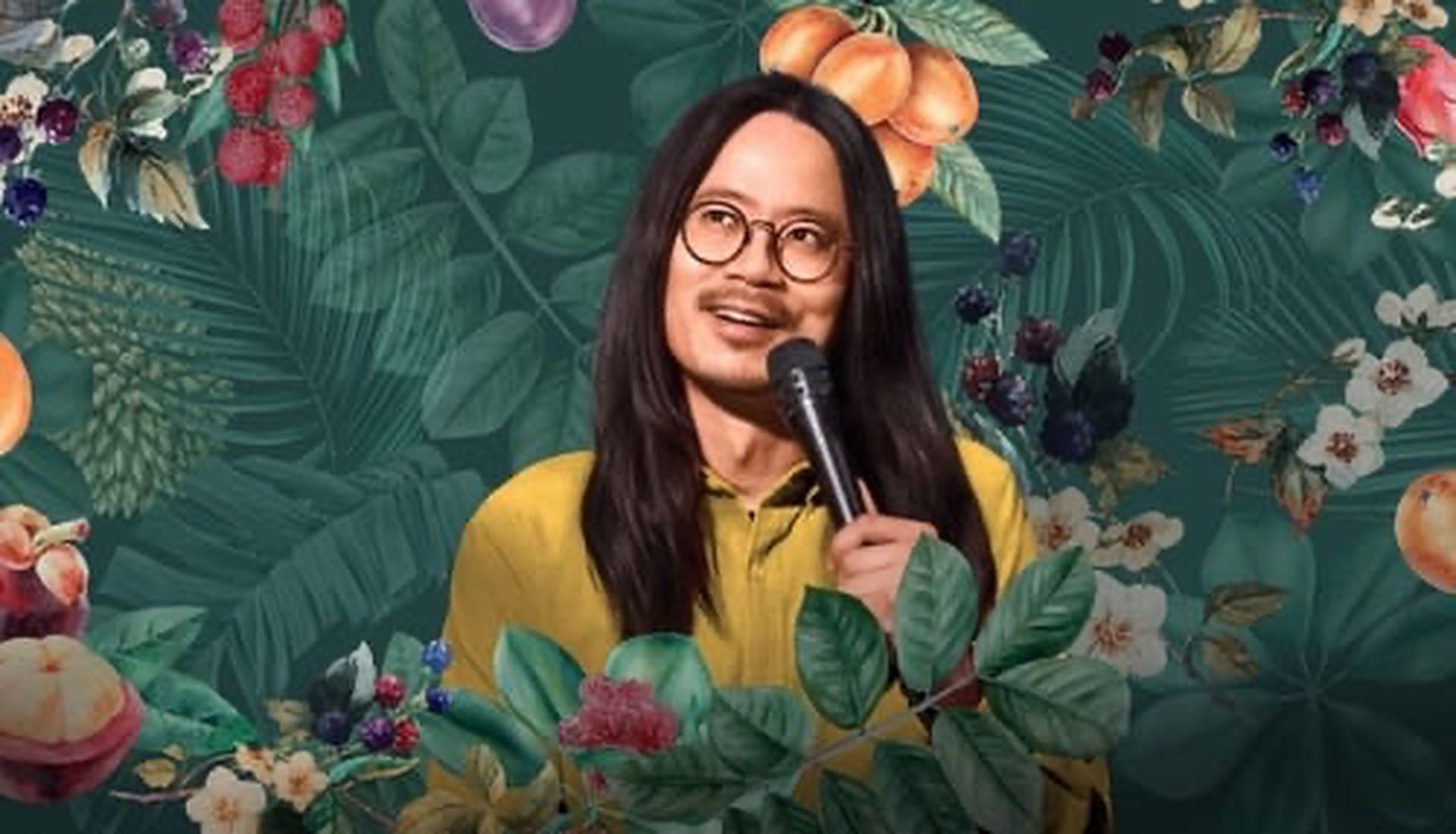 Look forward to finding out what I learnt about how the world works in the next post. In the meantime, I will leave you with something lighter: Sheng Wang’s stand up special Sweet and Juicy has given me much to laugh about this past month.